Posted on May 5, 2021, tagged as Magic, Story Starter, Writing, competitions 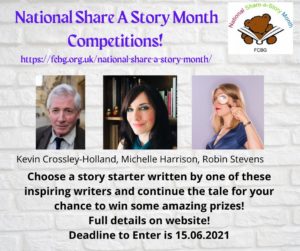 National Share a Story Month celebrates storytelling and story sharing, and is a fantastic opportunity for you to enter this writing competition run by the FCBG (Federation of Children’s Book Groups) in the UK.

I’m thrilled to have written one of the three writing prompts for 2021’s Story Starter competition, the theme of which is Myths, Magic and Mayhem. All the information and rules can be found on the FCBG’s website here. This is my prompt:

The first thing you need to know about magic is that it’s always found when you least expect it. The second thing is – no, wait. It’s best that I don’t tell you that straight away. I should probably start at the beginning, which was when I made the strange discovery in the new shop that opened at the end of my street . . .

If you use my prompt for your entry I’d love to see it, and welcome you to post it below in the comments. Posting here is just for fun so there are no prizes, but I promise to read every one that appears! The official FCBG competition rules are that entrants must be aged 7-12 and live in the UK, however readers aged 13-16 from anywhere in the world can post their story in the comments here. Word limit is 750 (including my beginning lines!) and your story must be complete. Remember that if you’re entering the FCBG competition you must do so at the address on their website and the closing date is 15.06.21.

Finally, if you are a winner or runner up in the FCBG competition using my prompt, please contact me with proof and I will gladly send you a signed, dedicated book.  Good luck!