The Shark Caller by Zillah Bethell – Author Q&A and Giveaway 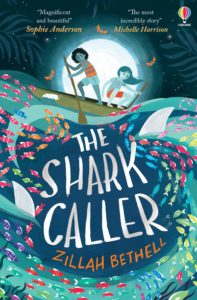 Last year I was lucky enough to have an early read of a WONDERFUL new book by Zillah Bethell. Waterstones has hailed it as one of ‘The best books to look out for in 2021’ and I completely agree. It’s called The Shark Caller, and it’s published on February 4th (the same day as A Tangle of Spells – exciting). I loved it so much they even put my words on the cover, look! 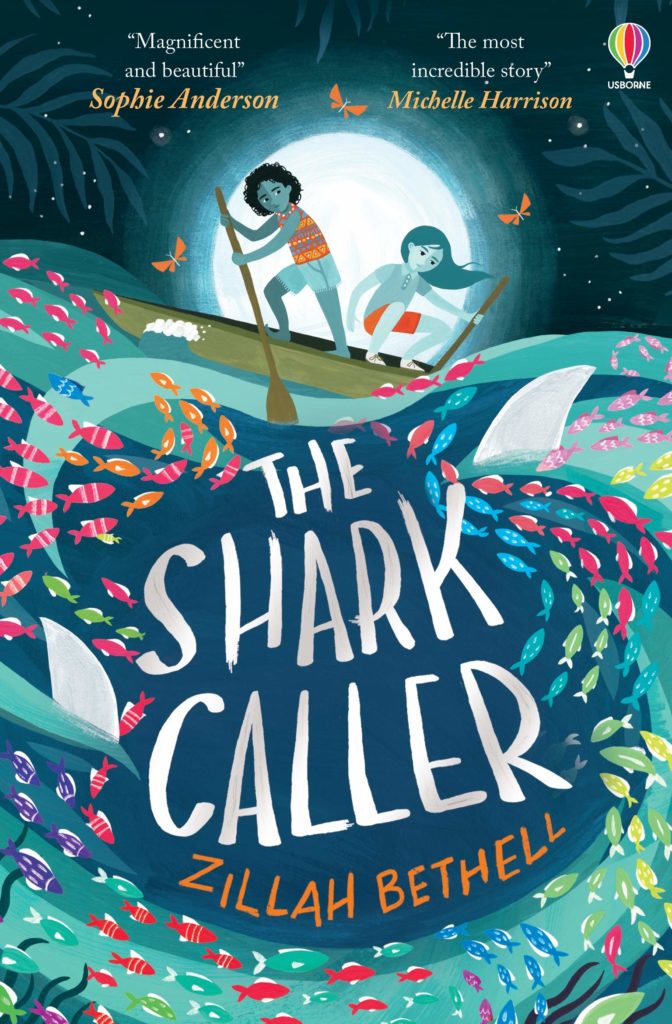 The Shark Caller is the story of a girl called Blue Wing, a girl desperate to learn the secret of summoning the ocean’s sharks. Blue Wing’s parents were killed by a deadly shark, and now she wants revenge. When a newcomer called Maple arrives in her village, the two girls clash. Can they overcome their differences to find the treasure Maple’s father is searching for – and will Blue Wing avenge her parents’ death at last?

This was one of the best books I read last year and believe me, it’s special. The only other thing I’ll say is that it has a killer twist that I didn’t see coming at all!

The author, Zillah Bethell, kindly agreed to answer some questions for me which give a fascinating insight into her life and inspirations for the book. Her publisher, Usborne, has generously provided two copies for me to give away – see below for how to win. Now for the Q&A. 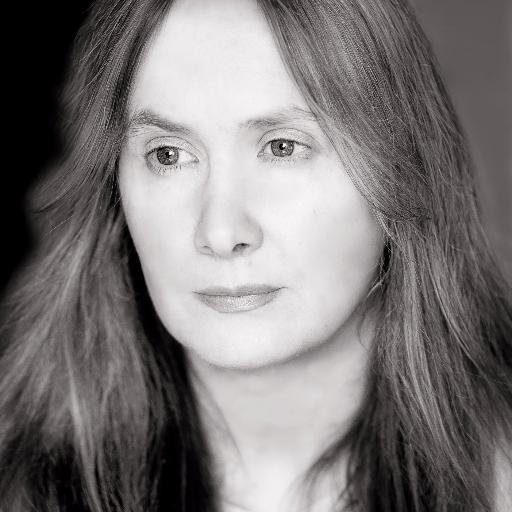 It took me about a year to write The Shark Caller in between working and looking after two children. I started writing after studying English Language and English and French Literature at university. I decided that I wanted to write my own books, not study other people’s. I won £1200 in a short story competition with my stories We Wear Watches and The Ship and the Ordinary Star. This was a huge amount of money to me (still is) and it encouraged me to attempt my first work of literary fiction, Seahorses are Real – a controversial novel about the generational cycle of abuse and how violence is perpetrated by women as well as men. I followed this up with a tragi-comic novel (my homage to Zola) set at the time of the Paris Commune called Le Temps des Cerises. I wanted to use cliches in this book for comedic effect and to voice the general public (a little like the Greek chorus). Then I wrote Girl in Profile which is inspired by the painter Gwen John (sister to Augustus) and her relationship with the sculptor, Rodin. It’s really about creativity and parenting and I wanted to explore perspective in my writing so the novella is a series of vignettes like paintings, sometimes going in close, sometimes distant with a real focus on symbols. My editor, Penny Thomas (of Firefly fame) suggested I try and write a children’s book. I think that perhaps she was a little tired of editing my adult fiction!. That’s when I wrote A Whisper of Horses and got my agent, Julia Churchill. A Whisper of Horses is set in an alternate reality and it’s really about the importance of trying to follow your dreams, however quixotic or difficult they seem. I chose horses because they are quite magical and magnificent creatures to me as I never saw one until I came to the UK. After that came The Extraordinary Colours of Auden Dare. This is about water as a commodity and a political issue (not just an environmental one) and also an exploration of AI and what it means to be human. Most recently, The Shark Caller – an exploration of time and forgiveness, I think, and an attempt by me to preserve some of my memories of Papua New Guinea.

2. You grew up in Papua New Guinea, where the book is set, and didn’t own a pair of shoes until you were eight years old. Were there other things you didn’t have (or did have) as a child, that western readers would find unusual?

I had no books, no toys (except an action man sent to my brothers with a scar on his cheek), no television, no computers, no sweets, no chocolates, no school. I had enormous freedom, the ocean, dancing, oral storytelling, beaches. When I came to the UK I didn’t like authority (still don’t), didn’t understand cultural referents, but was very athletic because most of my young life was a physical exploration of my environment. I am astonished here that many of my peers are frightened to be alone in the mountains etc. I am much more frightened of a sale day in a city!

In my head, lying on my bed. I work it all through in my head, hearing the words and sentences. I think this is because I grew up with oral storytelling. I don’t do a first draft etc. I simply rework in my head until it sounds right. I think it was MacNeice who said he slightly preferred the sound of words to the sense of them and this is how I feel. I remember trying to hear a word in my head to do with blood or the colour red and I knew it had three syllables and in the end it was ‘garneted’. Then I speak the words into an old tape recorder and eventually type up on the computer. When my children were a little younger they took great delight in changing the speed on my old recorder so that when I played it back I sounded like a demented Bugs Bunny or a crazed psycho!

4. Have you ever been face to face with a shark?

Yes, they are generally pretty shy creatures and won’t attack humans unless threatened. I do remember a dog being taken by a shark once in the shallows of the sea. Crocodiles were more of a threat in Papua New Guinea and often take the last person crossing a river, snatching a limb if they can to snack on!

5. Do you plan your stories or go with the flow?

I take a very long time thinking about the ideas I am writing about. In Le Temps des Cerises I took about 6 months researching the Paris Commune whereas Seahorses are Real just wrote itself. With Girl in Profile I studied the paintings of Gwen John in great detail – often women sitting passively in a room, waiting it seems for something to happen and this gave me the idea for the final character to be an older woman in a care home. In Auden Dare I looked into LAWS (Lethal Autonomous Weapons Systems) and the topic of water rights being used politically in many countries. After lots of thinking I then just go with the flow, lying in bed!

6. Do you have another job, besides writing?

I have always had another job and deliberately took work that could fit around writing and then children. The result has been poverty at times which is alright before you have children but harder when they come along. A wealthy person once told me you must do it for your art and not worry about the money which was a little irritating at the time. As a student I ate beans cold out of a tin and liked to imagine there was some kind of liberation in having no money at all (Balzac in his garret kind of thing) but since having children who seem to grow at an alarming rate – my son is 6ft 2 already – it feels more like a constraint at times. The pram in the hallway, no room of one’s own… The juggle of money, creativity and nurturing is endless and precarious.

7. What’s the best piece of advice you’ve ever been given?

Don’t give up. It’s very hard advice to follow nearly all the time! I often give up for months on end and then I feel even more depressed so I go back to not giving up and so it goes on in a nightmarish rollercoaster ride…

8. Did the title of your book ever change, or was it The Shark Caller from the start?

I called it Book of the Long Now because it’s about the idea that forever can last a moment I suppose. Then I think Usborne called it Swimming the Forever Sea for a couple of months, then there was the possibility of The Sorcerer of the Sea and finally it fell to the strong but simple The Shark Caller which I think is a great title and I’m pleased with it.

9. The story explores grief, and the village witch is able to speak to the dead. Have you ever attempted to contact ghosts or spirits yourself?

I have a pack of angel cards which I occasionally look at and perhaps the law of attraction means that the card I pick is oddly accurate or prophetic. I grew up in a culture where all things have an energy that goes beyond the passing of this life and I certainly believe that. I have had experiences where a butterfly, dragonfly or creature has appeared at a time when I am thinking about a person who has recently died. Often a bird is trapped in a room or a butterfly sails past. When driving on the motorway I once saw a hawk next to a rabbit (both alive) and I felt the presence of my late mother very strongly. I nearly always see a hawk just before I take a long car trip. A psychic once told me I was a super sensitive which means that you are simply very intuitive I think. If you are a writer (an inhabiter of skins) then I think you intuit more than you think or reason.

I am working on my second contracted book for Usborne which is concerned with identity. When you are stripped of everything – your name, your memory, your home  – then what is left? I think it can only be the will to survive. I have set this book in the vast space of the Australian interior. Australia and Papua New Guinea were once geographically connected and many times I heard about First People struggles and the horror of the Stolen Generations. It is also about the songlines which are the First Nation’s GPS system. If you know the right song you can travel through the desert which is a thing of great wonder to me. At the moment I am calling the book 22°S though this may have to change!

I am also working on a new piece of literary fiction called The Camelopard in which I am trying to experiment further with abstraction and narrative perspective – a process I began in Girl in Profile.

Walk. Every day. In the mountains. I love biking but I get a little annoyed by the ‘beautiful ones, high on diesel and gasoline’ (Suede I think, misquoted I know!) as I call them with their lycra and their puffy breathing!

Cats for their superior mystical beauty and dogs for their cold-wet-nose-in-the-hand-unconditional-love loyalty. BOTH!

Haribo to keep the children quiet, and for me an After Eight mint as it reminds me of my great aunt Jean.

Atomic by Blondie. I always dance to this at the end of a night out clubbing with my friend and I am so missing my dancing these days. Oh your hair is beautiful. Oh tonight!

I don’t have many shoes and am often barefoot so the wee mouse in the shoe can have a very happy home with me.

Thank you so much for answering these questions, Zillah, I loved reading your responses.

*THIS GIVEAWAY IS NOW CLOSED AND WINNERS HAVE BEEN CONTACTED BY EMAIL.*