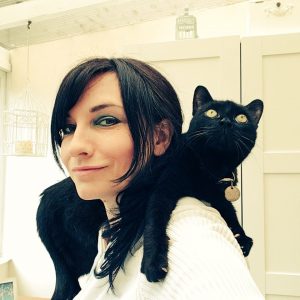 I’m delighted to announce some lovely news. Stripes Publishing, part of the Little Tiger group, has bought three books from me in a new series called Midnight Magic. I’m hugely excited as it contains so many of the things I love: a black cat called Midnight! Magic! Rhyming text! A flying broomstick named Twiggy! The first two books will publish in 2020. Here is the full press release:

Jennings said:
“From the very first verse, we were utterly charmed by Michelle’s classic feline tale, which overspills with imagination, warmth and humour. In Midnight, she conjures up a black cat with a difference. Midnight may have magical power in her paws, but she is very much a real cat! We are just so excited to be publishing Midnight’s adventures with Twiggy the broom, and can’t wait to bring Michelle Harrison’s spellbinding storytelling to a whole host of younger fans.”

In the middle of winter, three kittens are born in a barn. Two are ordinary, but the third, jet black and born on the stroke of midnight, is brimming with magic from whiskers to tail ‒ even sparking life into a dusty old broomstick! While her siblings pounce at rats, Midnight is busy perfecting her flying skills on the broom. But when things begin to get hot under the collar, she sets out with only loyal broom Twiggy at her side. Will they find a new family, or will Midnight’s magic cause mischief?

Harrison said:
“I’ve been bewitched by black cats ever since reading the Gobbolino stories as a child. My own cats are certainly mischievous but lack the charm of Midnight – who wouldn’t dream of drinking out of the toilet! I couldn’t be happier that Midnight has found her forever home with a suitably feline publisher, and I’m thrilled to be working with such an imaginative and enthusiastic team at Stripes.”

A young rhyming series for readers age 6 and up, MIDNIGHT MAGIC is perfect for fans of SQUISHY MCFLUFF, with a sprinkle of GOBBOLINO. Michelle’s writing is hugely visual and musical, combining to make a modern classic, hugely appealing and instantly collectable series.