Posted on February 13, 2018, tagged as Anniversary, getting published, ten years 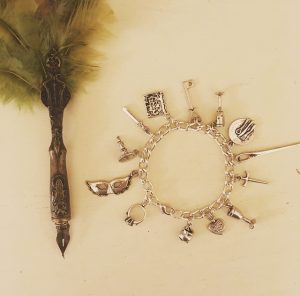 On February 13th 2008, I got on a train from Oxford and met my agent in London. We had a meeting with Simon and Schuster, one of three publishers who wanted to meet with me after reading my first manuscript, The 13 Treasures. After almost four years of working on this story and with numerous rejections under my belt, I still couldn’t quite believe I had an agent, let alone meetings with actual publishers who wanted to talk about my writing – despite this being the very thing I’d dreamed of for so long.

I could almost hear my nerves rattling. Julia (my agent) and I had already met with one publisher earlier in the week, and the meeting hadn’t gone as well as I’d hoped. They’d liked my story, but wanted a lot of changes; more than I was prepared to make for fear of losing the essence of the story. This second meeting was vastly different. They asked me what I was going to write next. A sequel, I suggested, written from the perspective of another character. They were keen. Upon leaving, they told my agent they would be making an offer to buy two books from me.

I was going to be a published author.

Ten years . . . it’s a long time! Yet in some ways it feels so recent. Much has happened within that decade. The high of being a published author was the first of many: holding my book for the first time; seeing it in an actual book shop; winning the Waterstones Children’s Book Prize; being translated into sixteen languages, as well as selling rights in the USA.

Since then, there have been another five novels (six counting the one that’s written and next to be published)! I gave up my job in publishing to write full time, and later became a parent. And of course, with life’s highs must come the lows. My wonderful mum – who was my biggest fan – died last year from cancer, followed only four months later by her partner, whom I thought of as my dad (also from cancer). I’m thankful they got to see me achieve my dream of making writing my career, and of how proud they were. Equally, I’m devastated that they will never get to read any more of my books or, more importantly, get to see my son grow up.

So, what a decade it’s been: both cruel and kind as is the tricksy, unpredictable way of life. If you are reading this, thank you for sharing it with me. I’m excited about what the future holds and all the stories yet to come – and I promise I’ll try to write faster!