Posted on July 24, 2015, tagged as Writing, getting published, rejection 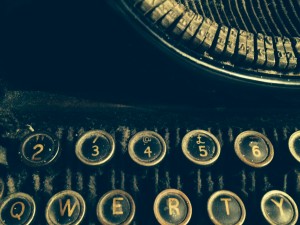 It’s been a while since my last blog, due to a tight deadline with limited time to write thanks to the lovely little toddler in my life. However, I’ve come up with an idea for something relatively quick and to the point which is hopefully informative (and inspiring!) to those of you who are also writers.

This blog is all about numbers. Thankfully not the adding, subtracting or weird-stuff-with-squiggly-lines that I don’t understand. I leave all that to my accountant. These numbers actually tell a story; of how I write and my journey to publication. Who knew numbers could be fun?* Here goes.

• Years it took to complete my first novel: 5.

A year to write the first draft, and four more years of rewrites/tweaks while I searched for an agent.

•Number of agents to ask for a full manuscript: 2.

When sending your story off to agents and publishers, they generally ask for the first three chapters plus an outline. If they like what they see, they’ll ask for the rest (full manuscript).

I kept as many rejection letters as possible, including one from a very rude agent who scrawled a note on my own covering letter and sent it back. Now, I’m all for recycling, but come on! If you’re going to crush someone’s dream and send them into a pit of snot and despair then at least afford them the dignity of headed notepaper. 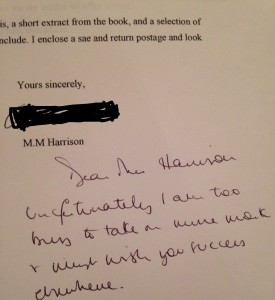 • Rejections after I had an agent: 8.

Yes, having an agent isn’t the end of the dreaded rejection letter. After brushing up my manuscript upon the advice of the lovely agent who took me on as a client, it was then submitted to 11 publishers. Eight rejected, three wanted to meet me and discuss the novel further. Of those three, two wanted to take the story in a different direction. One loved it as it was, and wanted a sequel. Bingo!

• Years I worked full time in other jobs while writing on the side (before and after publication): 7.

• Years I have made my living solely as a writer: 4.

Sometimes more, sometimes less, sometimes nothing at all. Sometimes work isn’t actually writing the book, it’s research, thinking time, post-it notes, and repeatedly removing a cat from the comfy bed/bottom-licking station it has made on your manuscript. 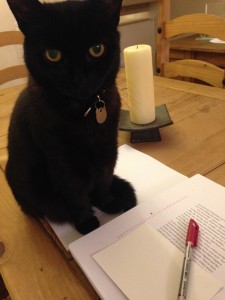 • Number of chapters I write a week: 1, on average.

I have no idea how that compares to other writers but I imagine it’s pretty slow. It works for me, though.

• Books I am currently contracted to write: 3.

Two middle grades (age 9-12), one of which I am working on now, and one young adult which I am about six chapters into but is on hold.

• Number of languages my books have been translated into: 16.

Yes, that scares me, too.

So there we have it. If there are any numbers related questions you’d like to ask (with the exception of how much I earn) feel free to leave a comment.

*I apologise to any maths enthusiasts who may be reading this. I genuinely wish I was better at it and, well, just more interested. But I’m not, and I hate it. Sorry.