On Books and Babies 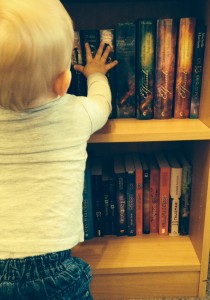 Last year I attended the Waterstone’s Children’s Book Prize event in London. Before the winners were announced, the previous year’s winner, Annabel Pitcher, spoke about her experience of the prize and gave an insight into her novel, Ketchup Clouds, on which she had worked during a difficult pregnancy. She made many comparisons between the creation of her book and the new life she was bringing into the world; most memorably that you keep and nurture both a book and a baby to yourself for many months as it develops and grows. Before you know it, it’s ready to make its debut in the world, which is incredibly scary in both instances. Have you done the best job you can? What if something is wrong with it? How do you deal with something so precious being out there in the big, dangerous world?

At the time, as a new mother to a four-month-old, the speech resonated, penetrating the milky, sleep-deprived fug that was my brain. During the year that’s passed, I’ve juggled motherhood and writing and I’ve remembered that speech many times and noted other similarities between raising a child and the creation of a book. So without further ado, my first blog of the year is a list of my (occasionally tongue-in-cheek) observations.

Advice only gets you so far

Look in any book shop and you’ll find the how to books. From what to expect in pregnancy, to feeding, behaviour and sleep routines, it’s all there. The same goes for writing: How to Write a Bestseller! Get Published and Earn Squillions! (Maybe not, but you get the idea). You can pore over these books, anxious for tips from those who have done it before, and done it successfully. You may well learn a few things, but putting advice into practice doesn’t always work out as planned.

During my pregnancy I habitually watched One Born Every Minute, obsessing over every detail as I anticipated my own labour. Would it go on for four days? How would I cope with the pain? Similarly, when I began writing my first novel, The Thirteen Treasures, I fixated on other writers’ success stories, cutting them out of magazines and making notes at author talks. I wondered how, or even if, it would happen for me. Neither event turned out the way I expected, because the truth is that you only really find out by doing it. You’ll have your own story, and until you live it, you won’t know what your limitations ‒ or your strengths ‒ really are. You find your own way, because just as every baby is different, so is every writer and every book.

There’s no clocking off time

After growing a baby for nine months, the next 16-18 years (or the rest of your life, some would argue) is spent looking after it. Before getting published I had no idea of the extent of work involved, because there is so much more to it than simply writing. It takes me, on average, six months to write a book. That doesn’t include the research, website upkeep, emails, fan mail, accounting, school visits, extra edits for foreign publishers. Just as parenting is a full-time job, so is being an author ‒ though many still fit it around a day job. Both are impossible to switch off from, and both come with a generous dose of guilt. Have I done this right? Could I be doing more? That book/baby has sold more copies/got more teeth than mine!

The cat will sit on it. 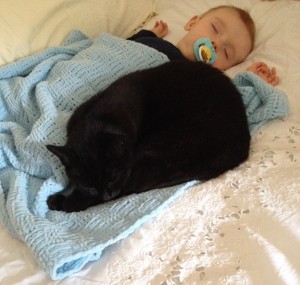 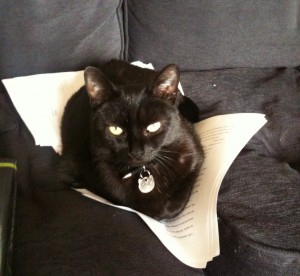 Everyone has a role to play

There is a famous saying: ‘It takes a village to raise a child’. Just as an average family will consist of several individuals who will each bring their own influence into a child’s life, the same can be said for the creation of a book as it is made ready for publication. Parents are the creators and carers of a child, building the foundations of the person that child will grow into and providing and nurturing it from birth until adulthood. Siblings, aunts, uncles, and cousins act as extra care-givers and entertainers, and grandparents are on hand for years of wisdom and hand-knitted cardigans (and to nag you to put those cardigans on, because it’s bitter out there).

An author is a book’s parent. They create it from their own unique imagination and write it in their own unique style, enduring sleepless nights and worry, but also experiencing rushes of pride along the way. An agent co-parents; supporting the writer editorially, planning for the future, and negotiating those all important payments. The book’s editor, like those siblings and aunts, will use their creativity and knowledge to hone the story into better shape. After that, the copy editor, an all-seeing eye of wisdom – or doom – will notice the weather on page 61 and point out whether it’s appropriate for the character to be wearing that knitted cardigan or not.

. . . or at least be able to tolerate it. My son is currently at the stage where rather than play with his toys, he prefers to empty the kitchen cupboards, leaving me in a never-ending cycle of putting pots and pans back in order. My friends with older children are weary of reading the same stories over and over again as their babies enjoy the familiarity (though I confess, I’m really looking forward to this with Jack).

With writing it’s a different type of repetition: revising. The first draft of anything will need work, so you must love a story (or grit your teeth) to persevere; re-writing, cutting, and adding to scenes ‒sometimes several times. Fortunately, I prefer the honing process to the writing of a first draft, though many authors I know detest it. Similarly, readers also like familiarity, as is evident from the amount of requests I get to continue writing about the same characters.

Routine is a must.

I don’t have a set routine for Jack during the day. Other than a couple of weekly activities we go with the flow and do things day to day depending on which friends/relatives are free and what the weather’s like. The one thing I am strict on is sleep ‒ chiefly because when Jack shuts his eyes, I open my laptop. So we have a regular bedtime routine of bath, milk, watching In the Night Garden, book, and bed at the same time every day. Sometimes he’ll play up a little, but generally this sequence winds him down and once he’s up those stairs, that’s it. No coming down. I’d never get any work done otherwise.

As I have to work in snatched hours around naptimes and life in general, there’s no real routine, which is something I miss and I’ve been struggling with. Before Jack came along I used to aim for 1000 words daily, then deal with paperwork and emails once that was achieved. I’m currently trying something a bit different which fits with my new lifestyle, and which I’ll write about in a future blog.

It’s official, having a baby gives you old lady hands. The constant sterilising, washing up, washing of clothes, and general washing of hands after nappy changes really takes its toll. Despite investing in some marigolds and having four different hand lotions on the go, I’m losing the battle to stop my poor dry skin from cracking and bleeding every time I bend a finger.

The only time my hands have been in (almost) as bad shape as this was a few years ago when I worked for Waterstone’s. After handling books and paper all day, then coming home to work on my own manuscript, I developed flaky hands which one of my colleagues helpfully labelled ‘handruff’. I wasn’t the only one; it seemed to be a common affliction (along with paper cuts) of booksellers due to the acid in the paper, and another colleague and I were forever smearing on hand salve to try to combat it.

I could go on, but I have enough material for a whole other blog post, so there may well be a part two to this in the near future. How about you? Have you noticed any similarities between writing and other aspects of your life, babies or otherwise?

3 comments on “On Books and Babies”