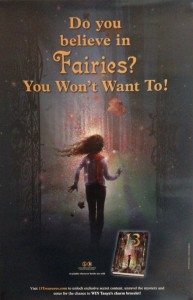 People often ask me which of the books I’ve written is my favourite. This is a fairly difficult question to answer, because each story is important to me and it feels somehow disloyal to pick one over the others. What I do say is that Thirteen Treasures is the book I am most proud of; not because I think it’s the best thing I’ve written, but because it was my first published novel ‒ my first finished novel. I stuck at it for a long time in the face of many rejections, learning as I went.

I’m still getting a lot of emails asking for a continuation of the Thirteen Treasures series. (Come on, you lot. Play nicely ‒ I gave you One Wish!) While I’d hesitate to say never, there’s nothing else planned for this series. It would depend on whether the right idea came along and whether my publisher/s wanted to commission it. The truth is I worked on those books for over ten years and now there are new stories I need to write. I also believe there’s something to be said for ending on a high and having people want more than to milk the series for the sake of it. Ultimately, this would only disappoint everyone, me most of all.

So instead, I give you ten behind-the-scenes secrets about the creation of the trilogy. Warning: If you haven’t read all three Thirteen Treasures books you may want to save this post for later, there are some spoilers ahead.

I base many of my fictional places on real-life locations. The town name Tickey End is tweaked from a town called Lickey End, which I once saw signposted when I was lost. I have no idea what Lickey End is like, but I liked the name so much I took note of it. Similarly, Hangman’s Wood is a real place in Essex in the town I grew up in. It’s much smaller than the forest in the TT series, but the catacombs (deneholes) are real, too, and fenced off to stop people falling into them just as they are in the books.

Early on in TT there’s a scene in which Tanya finds a dead fairy stuck to her grandmother’s car windscreen. The idea for this came from a long car journey I shared with my sister when a GINORMOUS bug splattered on the windscreen. We were trying to work out what it was when my sister joked, ‘It must be a fairy.’ Bringing magic into every day situations was a big theme in these books, so I knew I had to use it.

‘WHHHHAAAAAT?’ I hear you say! It’s true: Rowan Fox started out her life as a big beefy bushy-bearded man, another fairy hunter whose first appearance was at the very end of TT where Warwick shows up and helps Fabian to rescue Tanya. I’d had an idea that in a sequel, Red could be hiding out in the tunnels under Elvesden Manor with a fairy changeling . . . All good plot wise, but after two years of rewrites and rejections I realised my story was going nowhere and needed a serious shake up. Red’s character excited me, but I realised it’d be much more powerful if the character was someone Tanya ‒ and my readers ‒ could relate to. I made a snap decision to change him into a teenage girl, which was the best decision of my career at that point.

4. Red was the last character written into the book

Now, not only was the character wrong, but having him/her debut right at the end of a story is a huge no-no (unless, perhaps, you’ve already signed a publishing deal for a sequel. I hadn’t even got an agent at this point). In the early drafts, Tanya had a second-sighted sidekick called Lily who came to stay at Elvesden Manor. I’d had doubts about Lily for some time. She was, to be blunt, a bit of a wet lettuce, and deep down I knew there was no way Florence would have allowed another child at the manor when she didn’t even want Tanya there. When I could no longer ignore this I began the painstaking task of removing Lily from the story, and weaving Red in. It was, and still is, the biggest re-write I’ve tackled, but it was worth every word.

5. Who came back from the dead?

A handful of eagle-eyed fans have spotted the reference to ‘killing off one character too many’ in the acknowledgements at the end of Thirteen Secrets, and got in touch to ask who it was. The character who never survived the first draft was Sparrow: Red found him dead in the tunnels under Elvesden Manor after Eldritch had finished with him. In my desire to complete the book I probably got a little carried away and took it out on poor Sparrow. I’m glad I was persuaded by my mum and my editor to bring him back to life ‒ it would have been one tragedy too much for Rowan. 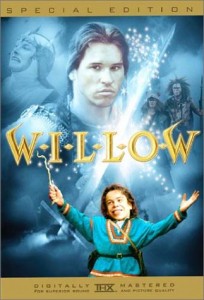 Most of my characters’ names are meaningful to me in some way: Tanya is named after my niece, as many of you already know. As a keen reader I knew she’d love to have the book’s heroine named after her, and as its meaning is ‘fairy queen’ it couldn’t be more perfect. Also, Warwick is named after Warwick Davies, who starred in one of my favourite childhood movies, Willow (you’re more likely to know him as Professor Flitwick in Harry Potter) and Suki is named after my first cat, an evil genius who almost put me off cats for life.

Normally I’ll write a story in the order that it appears, but this was written months in advance. I was stuck on the scene I was writing and impatient for the story to unfold, so I decided to skip ahead. I’d bullet-pointed several important moments in the story that I was looking forward to writing, the poem being one of them as it reveals the (partial) truth about Morwenna’s fate. As well as giving me something to focus on while I figured out the part I was stuck with, I wanted so badly to get to that point in the story that it kept me writing even at times when I felt like giving up.

This one is REALLY shameful. When I was redrafting TT and trying to get published, I was in full-blown fairy obsession mode. So much so, that when I applied for a job as a reporter on a local newspaper, I sent my CV on fairy paper . . . that I’d drawn myself. Unsurprisingly, I never heard anything back ‒ they probably thought I was bonkers.

I read the first book in this series when I was about halfway through my first draft of TT, and was gutted to discover that as well as being about fairies in a crumbling old house, there was a field guide of fey creatures. I’d actually written something very similar, with Tanya and Lily building up a secret file called F.A.B.L.E. (Fairies: A Body of Lore and Enlightenment). Needless to say, that subplot got deleted.

Almost immediately after finishing TT I sent it out to a publisher and began a sequel which flashed back to the past to tell Elizabeth Elvesden’s story. I made it only a few chapters in before I realised I needed to go back to book one and get that right before moving on to a second book. Of course, by the time I did my idea for the sequel was completely different and ended up being Red’s story.

That brings me to the end of my top ten behind-the-scenes secrets. Which was your favourite? Tell me by leaving a comment below and you could win a RARE US edition TT poster (above). There are two available, and you have until midnight (GMT) 28th February to leave your comment.

34 comments on “Behind the Scenes”